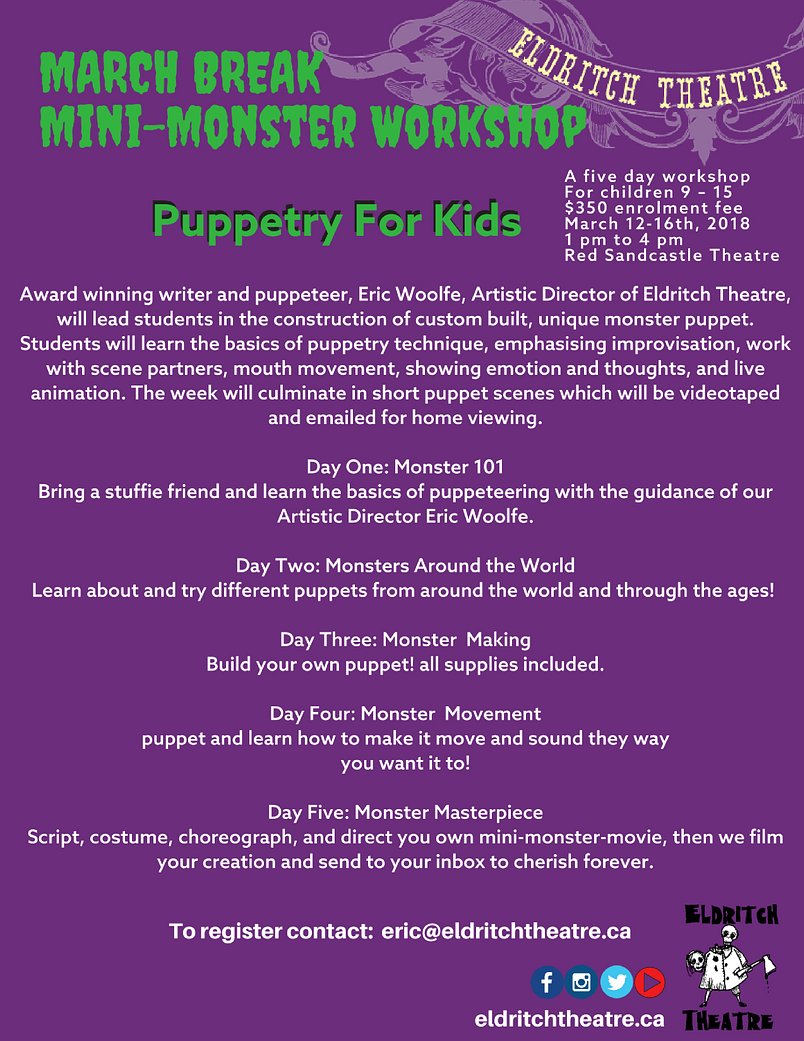 developed over his twenty year career as a puppeteer.

Participants will be given tools and techniques to improve the performances of puppet their characters, helping puppets act better! Topics will include Puppet Acting 101, Key Frame Theory, working with text, working with multiple operators, and externalizing puppet thoughts. Styles of puppetry will include table top, glove, articulate mouth, modified bunraku, and the ancient art of Stuffed Animal Manipulation.

*Participants are asked to bring a stuffed animal and a few short lines of memorized text.  Other puppets will be provided as needed.

Eric Woolfe is an actor, playwright, puppeteer and magician, and the Artistic Director of Eldritch Theatre, a Toronto Company specializing in horror plays using puppetry, live actors, and parlour magic. His work for Eldritch Theatre includes House at Poe Corner, Frankenstein’s Boy, The Haunted Medicine Show, Madhouse Variations, The Babysitter , The Strange & Eerie Memoirs of Billy Wuthergloom, Dear, Grendelmaus, and Sideshow of the Damned.  Some of his other credits include Old Man and the River (Theatre Direct), The Comedy of Errors (Humber River Shakespeare), The Glass Menagerie, Ghosts (Touchmark Theatre) Rocket & the Queen of Dreams, (Roseneath Theatre). Little Shop of Horrors (Canstage), Timon in Disney's The Lion King; Eric has been nominated for over a dozen Dora Mavor more awards as both an actor and playwright. He is a three time nominee for the prestigious KM Hunter Memorial Award. The World Encyclopaedia of Puppetry lists him as one of Canada’s exciting new wave of notable puppeteers.