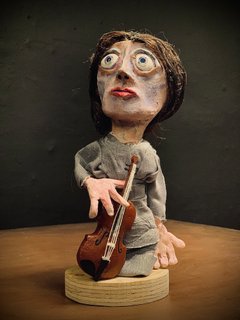 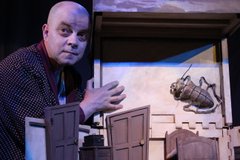 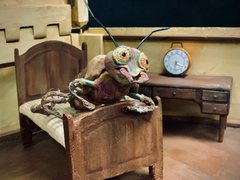 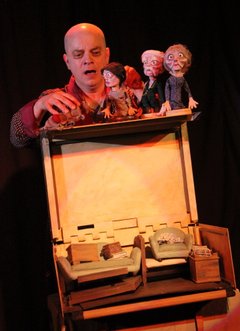 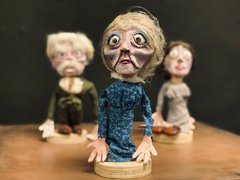 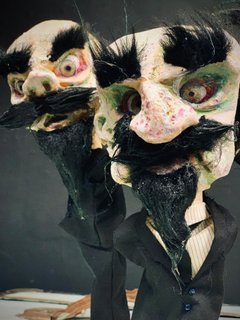 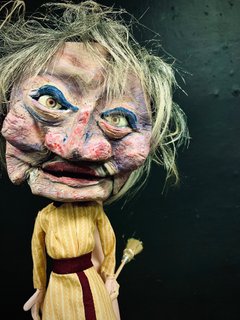 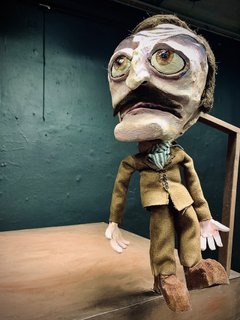 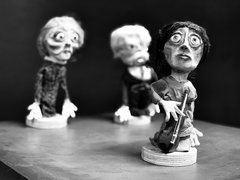 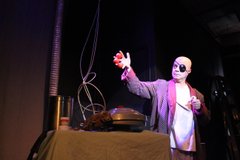 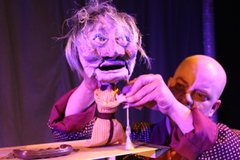 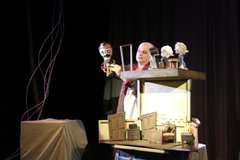 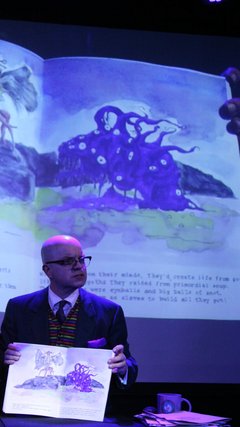 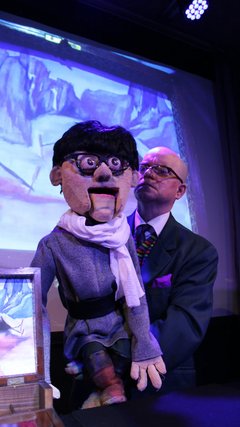 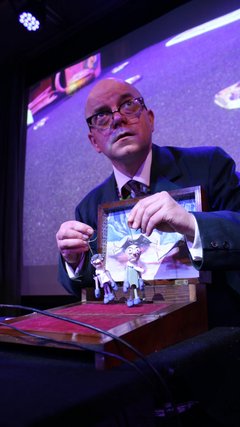 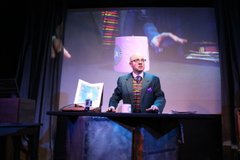 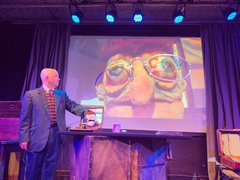 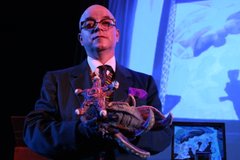 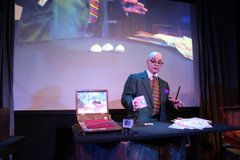 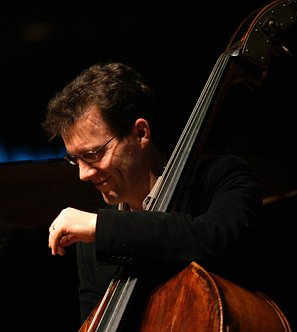 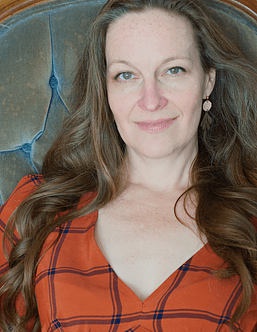 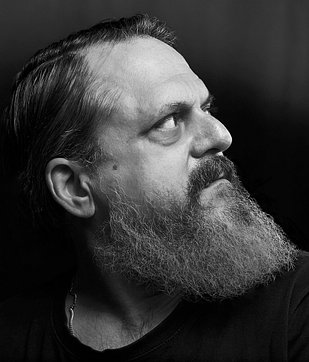 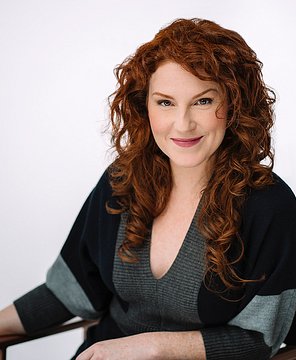 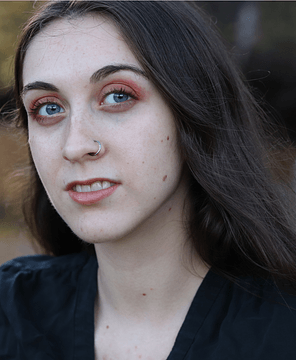 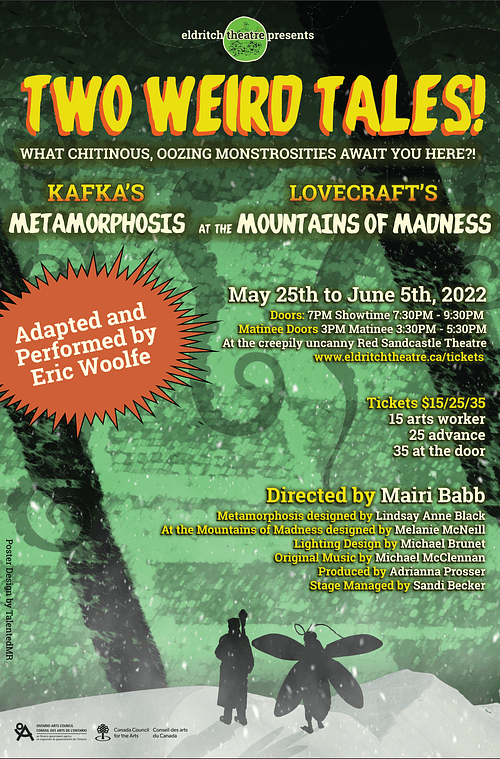 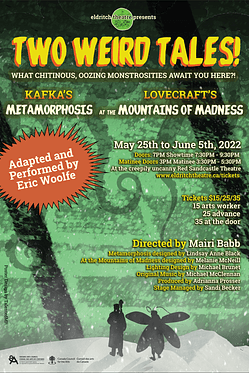 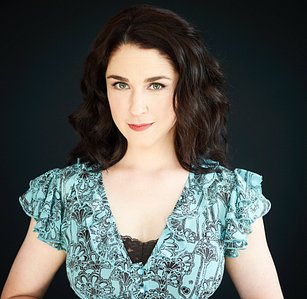 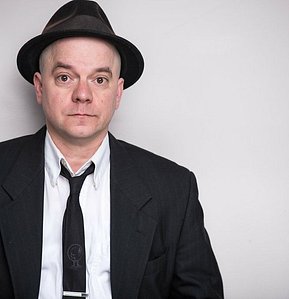 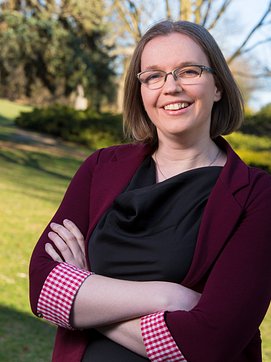 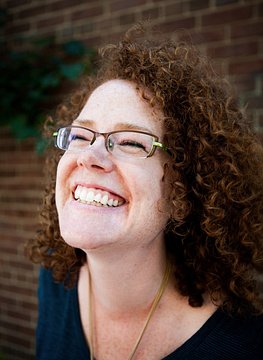 Sandi Becker is a Toronto based stage manager. She is a graduate of York University’s Theatre Studies Programme.

Michael Brunet is a multi-talented theatre artist. He has been nominated five times for awards for his lighting designs and three times as an actor, winning twice for design and once for acting. Michael grew up in the dark woods of Western Québec, kilometres from the nearest source of artificial
light. As a result he has excellent night vision and can navigate the darkest paths in near total darkness.
He used to gaze at the glow coming over the mountain and wonder about its mysterious source, imagining stories about the inhabitants of this world of light. Now, Michael is one of those inhabitants, using light to help bring tales out of the dark, leading others down the varied paths of the story. This is Michael’s second collaboration with Eldritch Theatre, having created the lighting effects for Space Opera
Zero. Enjoy the show.

Michael is an award winning composer, arranger and bassist.

Recent performances include 10 seasons at Stratford(Chicago, Billy Elliot, Rocky Horror, Crazy for You, Music Man, et al.), Anastasia, Charlie & the Choc. Fac.(Mirvish), Caroline or Change, Grey Gardens, The Wild Party(Musical Stage).  Writing/arranging credits include Charlottetown Festival, Stratford Festival, Drayton, Stage West, Grand Theatre. He was the inaugural winner of the Phil Nimmons/SOCAN emerging composer award and holds a Master of Music Performance degree(University of Toronto). He spent nearly 20 years as a Professor of Music Theory and Bass at Toronto’s Humber College.  Michael can an be heard on dozens of CDs as bassist, producer and/or arranger.

Eric Woolfe is an actor, playwright, puppeteer and magician, and the
Artistic Director of Eldritch Theatre, a Toronto Company specializing
in horror plays using puppetry, live actors, and parlour magic. His
work for Eldritch Theatre includes The Harrowing of Brimstone
McMcReedy, House at Poe Corner, Frankenstein’s Boy, The Haunted
Medicine Show, Madhouse Variations, The Babysitter, The Strange &
Eerie Memoirs of Billy Wuthergloom, Dear, Grendelmaus, and Sideshow of the Damned. Some of his other credits include Old Man and the River
(Theatre Direct), The Comedy of Errors (Humber River Shakespeare), The Glass Menagerie, Ghosts (Touchmark Theatre) Rocket and the Queen of Dreams, (Roseneath Theatre). Little Shop of Horrors (Canstage), Timon in Disney's The Lion King; Eric has been nominated for over a dozen Dora Mavor more awards as both an actor and playwright. He is a three time nominee for the prestigious KM Hunter Memorial Award. The World Encyclopaedia of Puppetry lists him as one of Canada’s exciting new wave of notable puppeteers. He has been nominated for 20 Dora Mavor Moore Awards and won zero.

Double the thrills, double the chills, a double bill full of nightmarish horror, low trash meets high art that fills you up on pulp!

Two Weird Tales is a theatrical double bill adapting two of the 20th century’s most acclaimed novellas of the uncanny: Franz Kafka’s Metamorphosis and HP Lovecraft’s At The Mountains of Madness. Both plays are created and performed by Eldritch Theatre’s artistic director, Eric Woolfe, using a unique blend of puppetry, parlour magic, and storytelling. The novellas were chosen as they exist at the crossroads where high art intersects low trash, expressionism meets pulp excess and allegory smacks head long into nightmarish horror, and yet arrive at this meeting place from opposite directions. Directed by Mairi Babb (Space Opera Zero) and be performed in Eldritch’s newly refurbished home at Red Sandcastle Theatre, in the heart of the Independent Theatre District in Leslieville.

The Metamorphosis is Franz Kafka’s famous tale about a travelling salesman who wakes up one morning to discover he’s transformed into a gigantic insect, and his resulting isolation and decline in the months to follow. This stage version has been created with celebrated designer, Lindsay Anne Black, who retired from theatre in 2014 as a result of her diagnoses of Multiple Chemical Sensitivity causing her to become largely housebound. This project was conceived as way to bring her talents back to the stage, by allowing her to collaborate remotely while in isolation.

"A whimsical, campy celebration of Kafka and H.P. Lovecraft. Intimate, eerie, goofy spectacle. And surprisingly faithful, even with the puppets & magic!"
- Istvan Reviews

HP Lovecraft’s At the Mountains of Madness, chronicles a doomed Antarctic expedition's discovery of an ancient, alien civilization rife with cosmic horrors, and is considered by many to be that controversial author’s greatest work. The adaptation was created in collaboration with Eldritch Theatre’s resident designer, Melanie McNeill, during the first Covid19 lockdown.

"Two Weird Tales is a fun, freaky, fascinating night out at the theatre! With an intimate space and creative storytelling methods, it’s a truly unique experience!" -  A View From The Box

Apprehension Engine for Mountains of Madness played by Mark Korven

When Mairi was a young naive ingenue living in Winnipeg, she never could have dreamed of working with the renowned Eldritch Theatre on these oozily chitinous shows. She was previously seen by Eldritch audience as Princess Jenora in Space Opera Zero. Other favourites include: War Horse (Mirvish/North America/Tokyo), The Great Divide (Harold Green), Spider's Web (Aquarius), Baskerville (Lighthouse), The Tempest (RMTC), Brief Encounter (VP/RMTC), Guys and Dolls (MTC/Citadel/TC), Cymbeline (Shakespeare Bash'd), The Gift of the Magi (Orangeville). Directing credits include: february - a love story (Sudden Spark), Early August (Lighthouse), Diminished (Driftwood's Trafalgar 24). Mairi has also appeared in Run The Burbs, The Stanley Dynamic, Good Witch, and What We Do In The Shadows.

Beatrice Freedman is a Toronto-based emerging stage manager. She has over 8 years of theatrical experience spanning stage management, direction and lighting design. She is currently working as the House Technician of the Red Sandcastle Theatre. Beatrice is delighted to be making her Eldritch Theatre debut and can’t wait for you to witness the wacky and wonderful that is Two Weird Tales.

Adrianna Prosser is an award winning digital storyteller specializing in marketing strategies for cultural organizations. She currently is the Artistic Producer of Eldritch Theatre, and General Manager of The Red Sandcastle Theatre.

Adrianna was the Social Media Specialist for The City of Toronto's Museums from 2011-2019, Groundling Theatre’s Julius Caesar 2020 production, a Co-Founder of GhostLight as well as their Digital Producer & Marketing Director, led Digital Marketing for Festival Players of Prince Edward County, and has held various contracts within the indie arts around Ontario. She is currently teaching the Web and Social Media Marketing course for Museum and Cultural Management program (since 2017), and has taught the Arts Marketing and Innovative Technology for the Arts, as part of the Arts Management program at Centennial College in 2019. www.adrianna-prosser.com

Melanie is a Toronto based set and costume designer who has worked extensively with Eldritch Theatre, Theatre français de Toronto, and Videocabaret, amongst many others.  She is also a Production Designer and Art Director in the tv world.  Melanie has received 3 Dora Awards, 7 other Dora nominations, a Prix Rideaux Award, and a nomination for the 2015 Prix d’Excellence artistique.  Melanie is a graduate of Ryerson Theatre School, and a member of Associated Designers of Canada.

Lindsay Anne had a fifteen-year career as an award-winning theatre craftsperson and production designer, an arts educator, and (somehow) a mentor. However, it all tried to kill her, so now she has to stay in her home indefinitely. Lindsay Anne is currently the Nebulous Associate at New Harlem Productions, a social media manager and consultant, a low-key graphic artist, and she creates words, images, and sounds for the digital realm. Recent works include: composer for “You Made It” (DM St. Bernard - Femmepocalypse); digital designs for Sound of the Beast (FIBA - Argentina), Underneath It All (NHP), and the Community Justice Forum (NHP). Her play GRASS is in super-early development with PTE, so maybe watch for that in the futuretimes. Her first production with Eldritch was building props for puppets on The Babysitter. She is hugely grateful to the marvellous Eric, and all involved, for doing everything possible to revamp the creative process on this production so that she could rejoin them and contribute from a safe distance.

At the Mountains of Madness